A HUGE 'THANK YOU' to RAJATON! 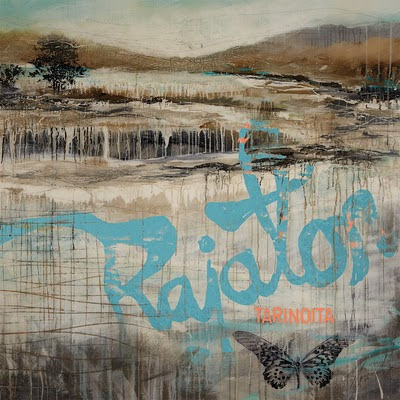 There is an amazing group from Finland called 'RAJATON'. I have had the great fortune to meet them on a few occasions, and attend a couple of their concerts. From the first day I heard their music, it inspired me, and I often listen to their music while painting or throwing on the potter's wheel.

On October 6th of this year, Rajaton released a new album, and guess whose painting is on the album cover?....This is amazing for me, as their music has influenced a lot of my work (If you know their music, I am sure you will recognize the influence.)

A bit about Rajaton from their website:
'In their native Finland, Rajaton is a bona fide pop phenomenon, successfully bridging the gap that often exists between classical and mainstream convention. The group has released 11 different albums. In 2003, Rajaton rose to n:o 2 on the charts with their album Joulu ("Christmas") which has to date sold double platinum in Finland. Building on the momentum of this mainstream success, in 2006, the group recorded Rajaton sings ABBA with Lahti Symphony Orchestra, an album which topped the charts in Finland and sold platinum in a month.

In 2010 Rajaton celebrates 13 years of music-making with one double platinum, three platinum and eight gold records in Finland to their credit. Their latest album, Tarinoita, is yet another significant milestone in Rajaton's story, as it is their first fully self-produced album, released in October, 2010, by their own label Boundless Records.'


Be sure to visit their website: http://www.rajaton.net/en/frontpage/ to learn more about them. Also, join their facebook page! http://www.facebook.com/rajaton

On October 15th, 2010, Rajaton will make their New York City debut at 8:00PM - singing the music of ABBA with The New York Pops at Carnegie Hall! If you happen to be in New York...you will not want to miss this!

Once again, a huge and sincere "THANK YOU" to Rajaton.... I know that when I am older and looking back on my career, this will be one of those moments that I will always remember!
Email ThisBlogThis!Share to TwitterShare to FacebookShare to Pinterest

Congratulations. This painting works so well with their title splashed in blue...very atmospheric. I am curious about their music now...never heard before...